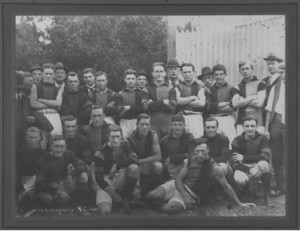 With ANZAC Day almost upon us, it’s worth reflecting on Canterbury FC’s people who served in WW1.

On March 22, 1915, the club held its annual meeting at the Canterbury Theatre in Maling Rd. Only days before, the ANZACs had fought a huge battle in Flanders, Belgium, which left Flanders devastated. Red, yellow & black colours were on houses and buildings all over Australia in a show of solidarity for the people of Belgium. In this spirit, Canterbury FC decided to adopt the Belgian flag for its jumper, and the club took the field from 1915 in this strip originally with yellow as the centre panel (the current design with black in the middle is from 1949).

It is also worth recalling with pride that the club’s first premiership team in 1920 was largely made up of ANZACs. The team included star full forward Fred “Possy” Latham who at 5ft 6, kicked 102 goals in a season. Possy was the first player in a local league to do so and went on to play with Hawthorn, kicking huge totals in the VFA. He had been a Gunner in WW1 and survived a gas attack during his time in service.

Bill Beck captained the 1920 side. He is standing in the middle of the photo in the dark shorts. He landed on the shores of Gallipoli in 1915. He spent much of his later life working for Carlton FC. He never married or had kids and when he died he left behind his prized possessions this photo and his war medals. The Carlton solicitor took possession of them and they then passed to his son. His son gave the picture to the father of Canterbury premiership player, Andrew Baker. This piece of history found its way back to the club after an absence of almost a 100 years, with the clubs photo having disappeared at an unknown time in history.

Everyone who wears the Canterbury jumper can appreciate its 100-year-old history and links to those events in Flanders, Belgium, in 1915 and the ANZACs who took the field in this jumper with pride.