Peter Curran played seniors for Canterbury in 1980-1981. In those two seasons he played some of the most outstanding football I have seen from a Canterbury footballer. Standing at a then very tall height of 6ft 4, Curran was a marking machine with a very strong one grab and ability to regularly take the speccy. He kicked the ball a country mile!! His courageous play was also a trademark. He played mainly as a key forward and ruck man. Due to his talent that was obvious to every team, he was often a marked man and teams would try to take him out of the game. 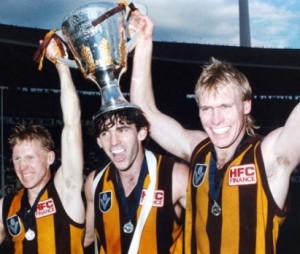 Curran described a day out at Victoria Rd Reserve playing Hawthorn Citizens FC, when their famous hard-man Jack Gavin, basically spent the afternoon trying to knock him out.
Although both of Curran’s seasons were interrupted by school footy commitments, his performance in 1981, our centenary year, was a major reason in the club making the GF and only losing by less than a goal.

Curran was recruited to Hawthorn and played in their ’84 losing GF and then in the winning ’86 & ’89 flags. He was one of the best players in the famous 1989 Bloodbath GF. Curran later played in Brisbane’s first ever Reserves flag under Rocket Eade in 1991 and coached Sth Bendigo to 3 premierships.

In recent years he has returned to the club to help out on occasions after being away since 1981. 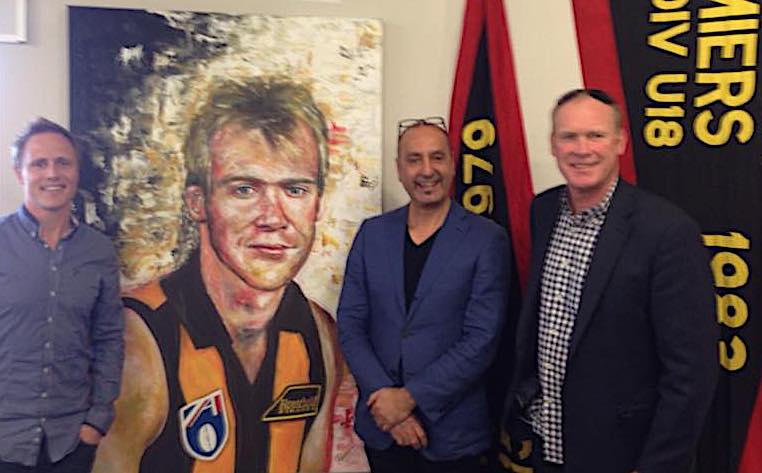 Peter at the unveiling of his portrait in the Jean Green Room at Canterbury Sports Ground in May 2015, with the artist, George Petrou second right and Tom Bayford at left of Camberwell Volkswagen who made it possible.