Our next champion player shortlisted for our Legends team is John Kitson. John is the personification of Phil Johnson’s favourite phrase, “Its not the size of the dog, but the size of the fight in the dog.” 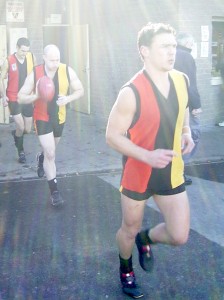 John played about 200 games for the club in the 1990’s & 2000’s. John won 3 Best & Fairest awards at the club, playing out of the Centre. This was no mean feat as he played with great midfielders such as Pete Smith, Rhett McKenzie, John Byrne, Randall Walker and later the great Wombat, etc. Players that also won many Best & Fairest’s.

John was yet another of the many former Camberwell High students who played for the club. John played in our 2003 Premiership team and is a life member of the club. Hard at the ball, hard at the contest and hard at the man when the occasion presented. A worthy player from our more recent eras.