Andrew Baker was one of the shining lights in a mainly tough era for the club. 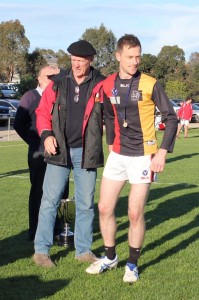 A player who was often underestimated by opposition clubs in match-ups and by his opponent, but always at their detriment. Bakes was a player who could take an overhead mark, but had an amazing ability to blindside his opponent, and get goal side and score. A terrific snapshot for goal and when he felt he had received unwarranted attention from a backman, was not adverse in letting him know about.

Bakes kicked over 234 goals in his career for the club, which is an outstanding figure for a small forward. It was fitting that his loyalty to the club in the hard years was rewarded by finishing a premiership player in 2015.

Andrew Baker is our latest nomination for the Legends team. This picture shows him with club legend JB, at the 2015 premiership celebrations.

We've locked in the business lunch for the first t